This graphic novel is the first in a ten-volume series, and it is an autobiographical account of the atomic bombing of Hiroshima.  Yes, autobiographical.  This really happened to the author, when he was six years old.  At 8:15, the atomic bomb detonated above Hiroshima, and the only way he survived was because he was protected by a concrete retaining wall at school.  He lost his brother, sister, and father: the house crushed his brother, and his father and sister were trapped and burned to death.  At the time, his mother was eight months pregnant, and the shock sent her into labor.  Adding tragedy upon tragedy, his little sister never reached her first birthday: she died of malnutrition. 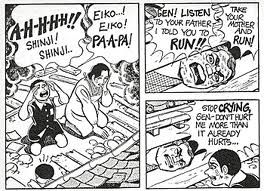 But I started with the end of the book first.  Before the bomb drops, we learn about Gen and his family: the brother who is sent away to the country to protect him from bombs, the other brother who enlisted in the army, Gen’s father, who believes the war is a senseless, needless tragedy, perpetuated at the hands of rich leaders who are willing to sacrifice everything, including the lives of their citizens.  Everyone is hungry; everyone is frightened.  Even amidst the fear, there are acts of generosity and kindness, though, and it contrasts with the horrors of war, portrayed through a child’s eyes.

I know that for American readers, it is sometimes easy to equate graphic

novels with comic books, and therefore associate them with frivolous topics: superheroes and the like.  However, that’s not the case.  Keiji Nakazawa began cartooning his experiences during World War II as a way to heal, and recover from the years of terror, starvation, and death.  Upon seeing his creations, This series was translated into many languages by Project Gen, and the author has this to say about the project:

“Human beings are foolish.  Thanks to bigotry, religious fanaticism, and the greed of those who traffic in war, the Earth is never at peace, and the specter of nuclear war is never far away.  I hope that Gen’s story conveys to its readers the preciousness of peace and the courage we need to live strongly, yet peacefully.”

This is one book that I won’t be forgetting quickly.