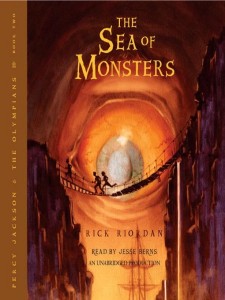 “But a whole sea of monsters–how could you hide something like that?  Wouldn’t the mortals notice weird things happening…like, ships getting eaten and stuff?’

‘Of course they notice.  They don’t understand, but they know something is strange about that part of the ocean.  The Sea of Monsters is just off the east coast of the U.S. now, just northeast of Florida.  The mortals even have a name for it.’

I didn’t get to give this book as much attention as I wanted to; it was finals week, the last week before graduation, and I suddenly needed to find a job.  Then, my favorite nine-year-old, who often shares books with me, begged me to finish it, because he was just getting to his last few pages in the first book of the series, The Lightning Thief.  So, thanks to Sam, I had the motivation to get through this exciting book.  I’ll hand it off to him tonight, and then undoubtedly have to climb up the stairs and encourage him to stop reading and turn off the light at least three times before he falls asleep reading it.  That’s the best kind of sharing, I think.

Anyway, back to The Sea of Monsters.  This is the second in the series, and the story picks up at Percy’s new school.  When a routine dodgeball match gets ugly, and Percy and his team is attacked by a mob of cannibals, he’s forced to flee to the safety of Camp Half Blood.  However, things aren’t they way he left them last summer.  Something terrible has happened, and the magic borders that protect the campers are beginning to disintegrate.  Percy suspects a curse, or perhaps poison.  But if someone can’t lift the curse, there will be no safe place on earth left for the demigod campers, those children of mortals and gods.

So, Percy sets out on another dangerous quest.  His satyr friend, Grover, is in mortal peril.  Grover had been searching for Jason’s golden fleece, which has the powers to heal and rejuvenate the land.  In his attempts to grab the fleece and save Camp Half Blood, though, Grover has been taken prisoner by a giant cyclops.  The cyclops may not be bright, but he sure is mean…and hungry!  Percy and his friends must brave the Sirens’ tempting songs, many-headed monsters, giant whirlpools, and risk getting turned into guinea pigs, all in order to save a friend.

Older readers will appreciate the twists that Riordan applies to Greek mythology.  I, for one, loved The Odyssey, and this book covers a lot of the same adventures.  In a way, it’s almost better, because Riordan offers a lot of details, like why Circe wants to turn people into pigs (well, guinea pigs, in this case), and just exactly what the sirens’ song sounds like.  Also, I didn’t find that the book falls into the Middle Book trap.  You know, how the middle book of a trilogy can sometimes feel a little incomplete, because its beginning and end are taken care of in other volumes?  That is definitely not the case here; this is a short, fast-paced, adventure story, complete in its own right.

If you liked this book, be sure to check out the next in the series, calledThe Titan’s Curse.  Or, if you’ve read the entire series and everything else by Rick Riordan and you need something new, I really like Artemis Fowl series by Eoin Colfer.  However, they might be for a slightly older crowd. But if that’s you, go for it!