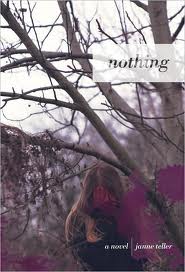 ” Pierre Anthon left school the day he realized that nothing was worth doing, because nothing meant nothing anyway.

The rest of us stayed on.

And although the teachers had a job on their hands tidying up after Pierre Anthon in the classroom as well as in our heads, part of Pierre Anthon remained stuck inside of us.  Maybe that was why it all turned out the way it did.”

Pierre Anthon has it figured out: we go to school to get a job, get a job to get time off, and all the while, we are trying to convince ourselves and others that it is all worth it.  But Pierre’s not buying it, which is why he walks out of school.  He ensconces himself in a plum tree, and occupies his time hurling plums and incisively nihilistic statements at his school mates.  He tells them it’s all meaningless, that we all become nothing, so we might as well stop our frantic attempts to prove otherwise.

In some tiny corner of their minds, they begin to be afraid that he’s right, and so, they set out to prove that he isn’t.

That’s when the pile begins:  the children gather and, one by one, demand the sacrifice.  Every child must give up what is most meaningful and important to them, piling them up in the abandon building they choose as a clubhouse.  It starts fairly innocuously, with a pair of green sandals and other treasures, but quickly escalates, creating a Lord of the Flies-esque spiral of violence and desperation.

While in high school, I hated Lord of the Flies, but deep inside, appreciated the meaning.  Even though it turned my stomach, I felt it was one of those books that everyone should read just once-not so much as a cautionary tale, but just to wake up those seeds of ideas, to unsettle the mind.  That’s what I like the most about this books: it’s not about the violence, it’s about the reaction of the students to Pierre’s statements.  His assertions make them uncomfortable because they are afraid they’re true.

Please read this book.  It will only take a few hours, and I don’t think you will regret it. It won several prestigious awards: The Best Children’s Book Prize and Le Prix Libbylit.

If you liked this one, I think you’ll also like The Alchemist, and of course, The Lord of the Flies.

3 thoughts on “Nothing by Janne Teller”