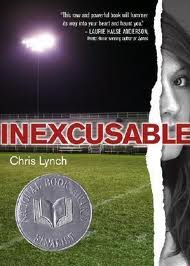 “Sometimes you get caught.  Caught up in moments, in the whirlwind of events.  Caught unawares.  It’s just not you but wrong place, wrong time, wrong company can really easily add up to giving people the wrong idea about yourself.  And yet again the way things look drift away from the way things really are.”

Kier is a high school senior, a football player, and what he liked to consider as a “good boy”.  But he’s done something terribly, awfully wrong-something that can’t be undone.  He raped a friend.  He committed date rape on the night of his graduation.

In this short, tense book, Kier sets out to reconcile what he thought of himself-just a good kid, a polite guy, maybe sometimes drinks a little too much, but nothing serious-with what has actually happened.  He might have mixed drugs and alcohol.  He might have followed the example of his father, who’s been drinking since Kier’s mom died.  He might even be spoiled, as one of his sisters says.  However, blaming his actions on drinking and friends is too simplistic, and that’s just what this book explores.  There are even other contributing factors: Kier has rarely heard the word “no” before.  He was emotionally distressed at the time.  He had been able to rationalize previous misbehaviors as “just playing around”. But the title says it all-it’s inexcusable.

Kier’s reasoning is unnerving; the intimate view of his thoughts reveals just how easy it is to believe a story you tell 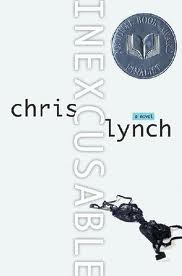 yourself, especially when the truth has the potential to ruin your life.  For almost the entirety of the book, he insists he hasn’t done anything wrong.  While he’s denying everything, he tells us the story. The effect of his self-deception is chilling.

A review on the inside cover of the text suggests reading this book as a companion piece to Laurie Halse Anderson’s Speak, a story of rape from a young woman’s perspective.  I think it would be a very good pairing for a high school classroom.  Definitely not fun, but an important topic to address.  Both books force readers to think, rather than automatically categorize actions as either good or bad.  Lynch demonstrates that someone with only the best of motives can still do irreparable harm.  “Furthermore, both books are highly-regarded award-winners; Inexcusable was a National Book Award finalist, as well as an ALA “Best Book”.

If you’d like to read another book like this, try Laurie Halse Anderson’s Speak.  For books about teens who’ve committed grave errors and are now ruminating about them, try Monster by Walter Dean Myers, or After by Amy Efaw.