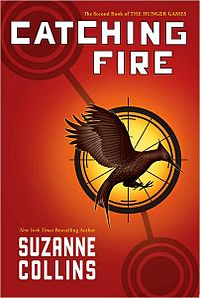 “In that one slight motion, I see the end of hope, the beginning of the destruction of everything I hold dear in the world.  I can’t guess what form my punishment will take, how wide the net will be cast, but when it is finished, there will most likely be nothing left.  So you would think that at this moment, I would be in utter despair.  Here’s what’s strange.  The main thing I feel is a sense of relief.  That I can give up this game.  That the question of whether I can succeed in this venture has been answered, even if that answer is a resounding no.  That if desperate times call for desperate measures, then I am free to act as desperately as I wish.”

Katniss thought she and her Hunger Games partner, Peeta, would be safe from the arena forever, never having to return to the battlefield where they were forced to fight to the death for the chance of extra food rations for their district.  However, some of her actions during the last Hunger Games inspired uprisings in other districts.  In response, the Capitol announces a Quell.  The Quell is a special Hunger Games, designed to quash the nascent rebellions.  In this Quell, the new Reaping will only include former participants in the games.  That means that Peeta, Katniss, and Haymitch are the only potential candidates from District 12 for this year’s Hunger Games.  This could mean back to the arena for Katniss.

Friends, you have either read this book already, in which case I don’t need to tell you how riveting it is; or, you haven’t yet, and there isn’t much I can say without spoiling it for you.  I will say that Catching Fire, while it doesn’t necessarily function as a stand-alone story (you’ll want to read The Hunger Games first), it avoids the middle-child syndrome of trilogies.  By that, I mean that the book doesn’t feel like something you have to rush through to get to the ending; it’s compelling and complete in its own right.  However, if you don’t have a copy of Mockingjay at hand for when you finish this one, you will probably feel anxious, so I recommend blocking off some time, staying in your pajamas and not doing anything until you finish the whole trilogy.

Reasons this installment of the story is awesome:  an even more creative and awful arena than last Hunger Games, new developments in the mysterious purported settlement of rebels in District 13, and more reasons to love Peeta. I’ve actually had to hide the entire trilogy from my younger sister, who has to finish her master’s thesis before she can read them (her idea, not mine!).

If you liked this book, you might like The Maze Runner by James Dashner or Uglies by Scott Westerfield.