“I got down the box of oatmeal raisin cookies and took two without asking.  I needed them.”

Jarrett’s mom takes care of foster babies in New York, so Jarrett is used to sharing his home with children he doesn’t know.  It’s not that big of a deal to him, until the day Kevon and Treasure show up at the door.   Treasure’s fine; she’s just a baby.  But Kevon?  He’s TWELVE.  That’s right, a whole year older than Jarrett himself.  It’s not so bad being a temporary big brother to foster babies, but being a temporary little brother is something Jarrett is not at all interested in.  Worse, everyone just assumes that Jarrett and Kevon will be friends with each other!  Jarrett’s not sure at all.  Kevon acts like he’s a good, but Jarrett suspects that he has some secrets he’s been keeping.Jarrett and Kevon navigate an uneasy peace.  After all, they both have bigger concerns than just trying to make friends.  Kevon worries about keeping Treasure safe in the foster system, and Jarrett is worried about trying to get his grades up so he can go on to the sixth grade.

Their daily lives aren’t the only issue. Both boys also face a racist world; when Jarrett sees a worker at the community center being stopped and frisked without cause, he is deeply angry.  A worker in the center explains it this way to Kevon and Jarrett: “I’m going to keep it real with you guys, you black and Latino boys are going to get stopped a lot. And it doesn’t matter what you do, or what you didn’t do. It’s just because of who you are. And in the meantime, I need to teach you what to do when the cops stop you — not if, when.”  In a 2014 interview with NPR, Coe Booth comments on that scene in the book, saying: “I think any parent or anybody who is dealing with young black boys — as is what’s happening at the community center in this book — I think every single community center has had this conversation with their boys. And it’s just so sad that we have to do this, but we do, and I hope that changes. I don’t know if what’s going on in Ferguson will change that, but I do hope it at least continues that conversation, because it’s just exhausting that this is still going on…”  I heartily agree.  I appreciate the nuanced, realistically complex middle school boys dealing with both the difficult situations of middle school and the ugly reality of racism in the world.

This middle-school realistic fiction is a definite winner.  I can’t wait to read more from Coe Booth. Go see her at her website!

If you liked this book, why not try these?

My Cousin’s Keeper by Simon French 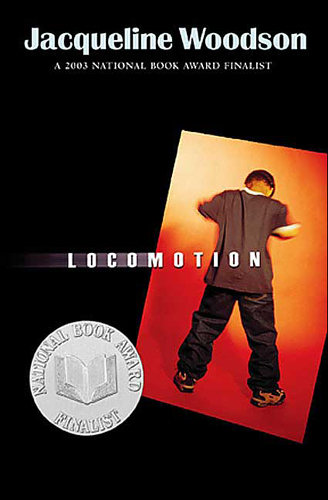 There’s two of me and Lili.

We were little them, dressed up at Easter time

and my head shaved Easter clean.

Mama’s blurry foot lifted up in the air.

When I look at the picture I can hear it.

Here’s the four of us

Everybody smiling at the camera but

me. I’m looking away from it

Lonnie’s parents died when he was seven, and now he and his sister live in different foster homes. He gets to see his sister, though, and his foster mom turns out to be a really nice lady, even if he was afraid of her at first.  Still, he longs for his life back before the fire that killed his mom and dad.  However, he’s learning a new way to cope.  Now Lonnie is eleven, and he’s learning about poetry in school.  His teacher says it helps people sort out their feelings.  He writes so many poems, the good kind of poems-those natural, thoughtful poems that feel like breathing-that it fills up a book.  Lonnie’s story.  You’ll love it even if you don’t love poetry, I promise.

Teachers will love the book’s natural fit for teaching forms of the poem: students will be introduced to the sonnet, haiku, and free verse as Lonnie learns them.  Students will love the book because it is a concise 100 pages, and of verse, at that: it’s an easy triumph for young readers who are exhausted by marathon reads. I love it because the poems are just right: accessible, full of concentrated emotion, and well-written.  I also love it because of Lonnie’s capacity for rejoicing in a world that hurt him badly.  If you’ve got a bit of time, I invite you to see what the world of an eleven-year-old poet in foster care looks like.

If you liked this book, you’re in luck! There’s another, called Peace, Locomotion, and it looks great.  Actually, here is Jacqueline Woodson’s whole long list of books, just in case you’d like to see what other things she’s been up to.  If you are really into the poetry novels, try Make Lemonade.  I just reviewed the second one in the trilogy! 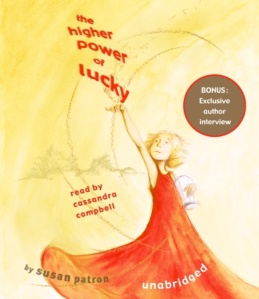 “It was getting harder and harder to stay couraged.”

“That dog would never have to do a searching and fearless moral inventory of herself.”

“…she made the thought go into a place inside that wasn’t her brain, so she wouldn’t have to think about it.”

So, let’s talk Newbery Medals. One is awarded each year to the author of the most distinguished contribution to American children’s literature.  It’s the epitome of praise for a children’s book.  I wanted to start out the blog discussing awards and reading award-winning books because, well, it’s a good place to start.  Each award and the books collected under it has its own character, and are often linked by certain similarities, perhaps in topic of the emotions the evoke in a reader.  I feel like the Newbery books often have a gritty feel, and leave the reader melancholic and introspective.  To me, they seem like the junior versions of the Nobel Prize books.  They’re not always fun to read, but they are undeniably moving.  Past winners of the Newbery and Newbery honor are Gail Carson Levine for Ella Enchanted and Karen Cushman’s The Midwife’s Apprentice (which won the prize) Catherine, Called Birdy (which won the honorable mention).  Another Newbery honor book is Janet Taylor Lisle, for Afternoon of the Elves, a book that both repelled and fascinated me as a child. In the next few weeks, I’ll try and review some of my favorite Newbery books.

Anyway, I started with The Higher Power of Lucky, a book set in the desert town of Hard Pan, population 43.  Lucky is a young girl who wants to grow up and be a scientist. Her dog is named the HMS Beagle, after Darwin’s ship, though, as Lucky notes, is “neither a ship nor a beagle”.  She spends her time catching insects for her future scientific needs, eavesdropping on the Twelve-Step meetings held at the local museum, and playing with Lincoln, a boy her age who is an avid knot-tier.  Oh, and missing her dead mother and worrying constantly about her Guardian Bridgitte returning to France and sending to her to an orphanage.  After discovering, and misunderstanding, several important papers in Bridgitte’s suitcase, she decides she will run away before Bridgitte can leave her.  After waiting for three pivotal signs, she hits the road.

The nice part about children’s literature is that there aren’t a lot of terrible endings.  Don’t worry, this one doesn’t have a slap-you-in-the-face plot twist or anything to dishearten you.  It works out all right in the end.

The gems in this story come straight from Lucky’s mouth and her unique observations about the world.  The book is full of her musing about “meanness glands” and “knot-tying brain secretions” and her thoughts on Brigitte’s use of parsley.  The book is gentle, which is refreshing, considering the subject is an orphan growing up in astonishing poverty in the desert.  Lucky is like a combination between Kate in Trenton Lee Stewart’s  The Mysterious Benedict Society and Ramona from Beverly Cleary’s series.  She’s charming, plucky, and very easy to relate to, a character that will stick with you long after the book is over.